Murder in the Cathedral

This year we have been working on T.S. Eliot’s Murder in the Cathedral. The originality of this play lies in the combination of rich poetical language and a powerfully ritualistic form. We have tried to bring to life this political and religious intrigue from the 12th century by exploring all possibilities of work on movement, space and mime. 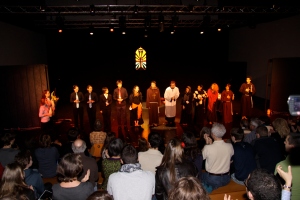